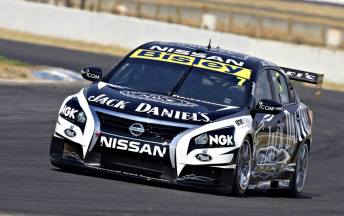 Two of Nissan’s international stars will drive Nissan Motorsport’s Altima V8 Supercars in a special test at Winton next month.

German Michael Krumm and Spaniard Lucas Ordonez will steer the Altimas on Monday August 12; a day prior to the team’s first full test day since the season began.

News of the guest driver test comes just a week after the launch of Nissan’s ‘global driver exchange’ program that will also see two internationals join Rick Kelly in a Nissan GT-R at the 2014 Bathurst 12 Hour.

Krumm and Ordonez will fly to Australia for the test before departing for the following weekend’s SuperGT race at Suzuka.

Nissan Australia’s general manager of motorsport hinted that, having conservatively opted for experienced V8 Supercar co-drivers this year, the team will be evaluating the internationals for next season’s endurance races.

“It’s a vote of confidence from Nissan’s global motorsport decision-makers, including Nismo, for the Australian program and the V8 Supercar Championship,” said Fisher of the Winton outing. “The test will give two of Nissan’s premier factory drivers invaluable data and track time behind the wheel of an Altima V8 Supercar and give us more options for endurance drivers in 2014.

“Conversely, I expect that our active participation in the Nismo Global Driver Exchange will give our guys some mouth-watering international opportunities in the future.”

Team owner Rick Kelly also believes that the day will be far more than just a publicity stunt, with the Australian squad hoping to learn from the two internationals.

“The Gold Coast (600) event (which ran to an international co-driver format from 2010 to 2012) has opened our eyes to the talent that lies in different parts of the world, and we’ve learnt a lot from those races,” said the 2006 V8 Supercars champion.

“To have Michael Krumm and Lucas Ordonez out here will be a great opportunity for them, and for us to learn from them as well.”

The four Nissans of Rick Kelly, Todd Kelly, Michael Caruso and James Moffat will be in action with the remainder to the V8 Supercars field at Queensland Raceway this weekend.

Rick Kelly is the championship’s highest placed Altima driver in 12th after 21 races, with the team’s VK56DE engine still lacking the outright power and fuel economy of its established Ford and Holden rivals.