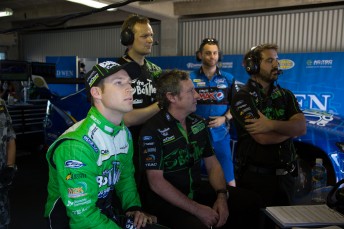 Nash has described the unique and highly gifted Reynolds as being a ‘tease’ after demonstrating more than once that he has been on the verge of success only for fate to intervene.

Reynolds has shown blistering form in recent rounds, claiming a pole position at Darwin and setting the fastest practice time before topping the times to win pole in both races at the Townsville meeting.

An ignition problem thwarted Reynolds’ strong run in the Sunday race when he was sitting in second behind team-mate Mark Winterbottom.

Reynolds’ current contract, like that of FPR stable-mates Will and Alex Davison, concludes at the end of the current season, and Nash believes that renewing for a second term will be the best outcome for both parties.

“Dave is a totally different, unpredictable person because he just has all this ability but I’m always talking to him about having a more consistent approach,” Nash told Speedcafe.com of Reynolds.

“He is frustrating but a great guy to work with. He has a great temperament about him.

“I’m sure he’ll get there. It’s his second year with us at FPR and I think the real benefit for him is hanging around into the future and consolidating himself..”

Intra-team aggravation has struck FPR on multiple occasions this season; something which Reynolds has not been immune from.

The former Australian Formula Ford and Carrera Cup Champion was spun out of second place by Mark Winterbottom during the opening race at Hidden Valley last month.

Reynolds was keen to point out to media in Townsville that he never received an apology from his team-mate over the collision.

“He and Frosty demonstrate that they are there to be successful,” said Nash of the situation.

“I think their abilities have ruffled their feathers with each other but they are also being professional at the moment and getting on with each other.”

Reynolds will be out to turn around his fortunes from Queensland last year with two lowly placed finishes.

The schedule for the Coates Hire Ipswich 360 this weekend starts with a revised practice format.