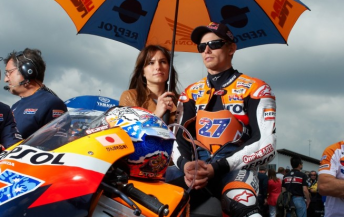 Casey Stoner will return to the controls of a MotoGP bike next week when he makes the first in a series of testing appearances for Repsol Honda.

The 27-year-old sensationally quit MotoGP at the end of last season, moving home to Australia where he now races in V8 Supercars’ second-tier Dunlop Series.

His new base and career hasn’t stopped speculation that the two-time World Champion could make wildcard race appearances in the Australian and Japanese MotoGP rounds later in the year; rumours that the latest news will undoubtedly fuel further.

Stoner is scheduled to make four testing appearances this year as Honda evaluates its 2014 contender.

Following this week’s Dunlop Series round at Queensland Raceway, Stoner will fly to Motegi, Japan, for the first of the tests.

Stoner remains highly critical of several aspects of the current MotoGP regulations, and says that he is “still happy” with his decision to end his full-time motorcycle career.

“But there are times when I miss riding my RC213V so I am really happy that Honda have asked me to do some testing in Motegi this year,” he added.

“It will allow me to enjoy what I miss which is riding a MotoGP bike.”

Although stressing its desire to have Stoner back in its team when the Australian departed last season, the Honda Racing Corporation has denied that wildcard appearances are a possibility this year.