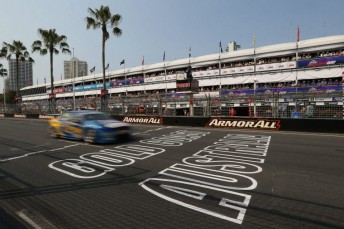 The V8 Supercars events on the Gold Coast, Townsville and Ipswich will continue until at least 2016 under a new funding deal announced by the Queensland government today.

The future of the two street races had been the subject of significant speculation amid the Newman government’s recent cost-cutting push.

It is understood that the new deals have been struck on a reduced funding basis, with total government expenditure on the events dropping by around $2 million per year from its previous $9 million level.

The Gold Coast 600, which will run without the international co-driver format this year, is expected to be taking much of the hit.

Tourism Minister Jann Stuckey declined to elaborate on the details of the new agreements, but indicated that the GC600 will receive somewhat of a freshen up.

“The funding amount for these combined events in our new negotiations can’t be disclosed because of our contractual arrangements,” said told the ABC.

“I can say though we can expect a lot more excitement around this event, with a refreshed look and other events planned that involve our community.

“The events of the future I understand are going to have a lot more variety to them and these three races as a package offer something around the state and allow us to showcase all of our fantastic destinations in Queensland.”

The added variety is expected to come through a week-long festival built around the Gold Coast race; the details of which will be debated by a local committee.

V8 Supercars’ own headquarters sit in the Gold Coast suburb of Nerang, while nine of the 28 cars in the field, including those of category pace-setters Triple Eight, are based in Queensland.

Confirmation of the Queensland events marks a significant step towards finalising the 2014 V8 Supercars calendar, with the Sydney 500 now the only key government deal still poised to expire.

The Coates Hire Ipswich 360 will take place at Queensland Raceway this weekend ahead of the Armor All Gold Coast 600 in October.