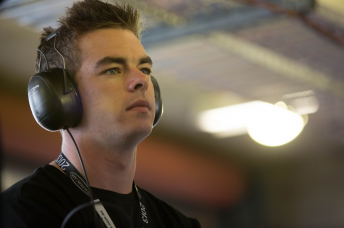 Scott McLaughlin will remain with Garry Rogers Motorsport under its new Volvo Polestar Racing guise after extending his deal with the Melbourne-based squad.

McLaughlin confirmed this morning that his new deal extends until the end of the 2016 season.

The 20-year-old has been a standout in his rookie campaign, taking race wins at Albert Park and Pukekohe.

Although team principal Garry Rogers stated a preference for keeping both McLaughlin and team-mate Alexandre Premat at the launch of the Volvo program last month, the rookie’s performances are understood to have attracted significant interest from other teams.

“Very excited to announce I have signed a new deal with Garry Rogers Motorsport which will see me race with them till the end of the 2016 season,” said McLaughlin, who graduated to the top class after winning the 2012 Dunlop Series.

“Garry gave me my opportunity in the main series and I am looking forward to sticking by him and the team, and being a part of Volvo’s growth in V8 Supercars.”

Premat’s future with the team is yet to be confirmed, with the Swedish Polestar outfit having stated a preference for a Swedish driver in order to assist with the project’s development.

McLaughlin and Premat currently sit 11th and 17th respectively in the points standings after 21 races.