Marquez marches to US MotoGP victory

Marquez marches to US MotoGP victory 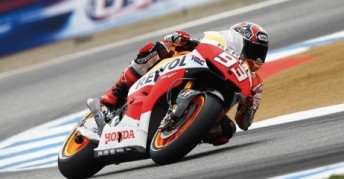 Young gun Marc Marquez extended his lead in the MotoGP world championship after recording a comfortable victory in the US GP at Laguna Seca.

The young Spaniard had never turned a lap of the daunting Californian circuit before this weekend but once again he showed his class.

The Honda rider was forced to follow long time leader Stefan Bradl for several laps before grabbing the lead and marching on to the chequered flag.

Bradl was denied a maiden win but he held on for second for his first podium, finishing ahead of Yamaha’s Valentino Rossi.

Pole sitter Bradl reacted best to the lights and he stormed into the lead at the first turn.

The LCR Honda rider was followed by Rossi, Marquez and Lorenzo.

Alvaro Bautista (classified fourth) started from third but found himself in fifth however he soon made amends with a slick pass on Lorenzo on the opening lap.

At the front Rossi was stalking leader Bradl in the early laps until he was forced to defend from a hard charging Marquez.

The nine-time world champion and MotoGP rookie were involved in a fascinating game of cat and mouse which came to end with an unbelievable pass at the spectacular Corkscrew.

The Honda man managed to run around the outside of the Yamaha using the banking to his advantage.

Marquez and Rossi’s scrap allowed Bradl to move into a healthy lead and he looked to have the pace to record his maiden victory.

Further down the field, Pedrosa began to close in on Lorenzo in fifth while Randy De Puniet and Aliex Espagaro suffered retirements.

With the leader in sight, Marquez upped his pace with a string of fast laps to haul in Bradl bringing the gap down to just three tenths of a second.

There was even more good news for Honda with Pedrosa passing Lorenzo for fifth position.

Bradl produced a strong showing to keep Marquez at bay but the rookie’s relentless pressure eventually told with 13 laps of the 32-lap race remaining.

Marquez slipped his bike down the inside of the German at the final corner to grab the lead.

Ducati duo of Nicky Hayden and Andrea Dovizioso came home in eighth and ninth with Hector Barbera rounding out the top 10.

MotoGP will return to America in three weeks time when the championships continues at the iconic Indianapolis Motor Speedway on August 18.

See below for full US MotoGP results