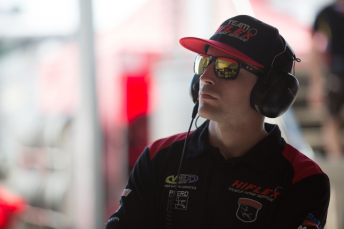 Joining the Dunlop Series following stints in British Formula Ford and Formula 3, McBride has enjoyed a mixed start to his V8 Supercars career and sits 20th in the points standings ahead of this weekend’s fourth round at Queensland Raceway.

“We’re really keen to help get Nick further up the grid; if he can qualify the car better, he can run a lot better,” D’Alberto told Speedcafe.com.

“Nick has come from open-wheelers which are a very different animal and it’s going to take time to adapt to these cars. “I’m just here (Winton) to do a few laps and make sure the car is good in order to help out ahead of Queensland.

“For me, It’s good to get back in it. Over the year you adapt your driving style so it’s interesting to see what the old car feels like again.”

Although D’Alberto’s Holden is not on track, the testing rules grouping main series teams with their second-tier offshoots ensures that the day comes out of the team’s overall allocation.

D’Alberto’s Holden has only tested once this year outside of the compulsory pre-season hit-out at Sydney Motorsport Park, although the 27-year-old doesn’t believe it’s holding his squad back.

“The timing just hasn’t worked out for us, but Walkinshaw has done some testing and we can piggyback off that pretty well,” he said.

TDR’s customer relationship with the Walkinshaw group has seen a stream of the squad’s recent development items flow onto the #3 Holden, while the team’s previously confirmed co-driver, Nick Percat, was last week recalled in the opposite direction.

D’Alberto has been dealing with a flood of interest in the now vacant seat since Percat’s departure and hopes to have a replacement locked in prior to the co-driver practice session at Queensland Raceway this Friday.

“It’s a headache because everybody has different strengths and there are some bloody good operators out there that don’t have a drive,” he said, emphasising his team’s desire for an experienced hand.

“Everyone really wants to get on the grid and with there only being a couple of seats left it’s pretty hot property.

“It’s not something that I really wanted to do at this time of year, but we just need to select someone that will fit in to the team really well and do a solid job.”