Brabham crashes out in second race at Mosport

Brabham crashes out in second race at Mosport 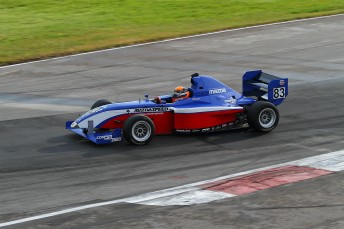 A tough outing at Mosport on Sunday for Matthew Brabham

Following a third place on in Race #1 and after starting sixth, the third-generation racer from the Gold Coast was fighting for third place with Nicolas Costa on the sixth lap of the race when the pair collided and both were eliminated from the race.

“Disappointing end to the weekend for me,” Tweeted Brabham.

“Was pushed off and into the wall, had a big crash. Looking onward to Mid Ohio.”

“This is a huge weight lifted off my shoulders,” said Blackstock.

“Matt [Brabham] has had his fair share of wins this season and it’s nice for me to finally bring one in. Unfortunately, Matt had a really rough race.”

Up until this weekend Brabham had scored six-straight wins and although Mosport didn’t go to plan he continues to lead the championship standings on 273 with Ferreira (222), Blackstock (203), Spencer Pigot (185) and Anderson (162) completing the top five.

The next event on Pro Mazda Championship Presented by Cooper Tires is at the Mid-Ohio Sports Car Course in two weeks.