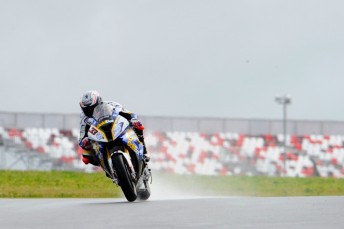 Marco Melandri won the first and only WSBK race in Moscow

Marco Melandri has taken his third World Superbike race win of the season in Russia amid a highly dramatic opening race, which saw a number of crashes, engine explosions and much of the field pitting due to inclement weather.

The opening lap saw a number of riders become separated from their machines – the most notable being Carlos Checa, Jules Cluzel and pole-sitter Davide Giugliano. Championship leader Tom Sykes pulled to the side of the track on the third lap only to see his bike explode in a fiery mess, he alighting the motorcycle in very quick fashion. Eugene Laverty was another to be caught out in the wet conditions, recording his fifth DNF of the season.

It became evident that the rain was approaching only certain parts of the racetrack. With the World Superbike Championship adopting a ‘lights to flag’ non-stop racing rule this year, it was the first time that teams were faced with  this scenario.

A number of riders made an early call to switch to wet weather suitable rubber, whilst others waited. The rain belted down with less than five laps to go, forcing many more into pitlane for the ridiculous 53 second minimum pitstop.

Ultimately, it would prove crucial in the overall outcome – Melandri’s BMW team able to get the Italian back on track faster than Chaz Davies and Melandri adopting to the wet track in better fashion.

Loris Baz was a surprise leader at one point holding out right to the end to stop for his wet weather rubber.

So bad are conditions in Moscow, the World Supersport race and the second World Superbike race were cancelled after a lap one incident involving Andrea Antonelli in the Supersport race saw officials throw the red flag for safety reasons.