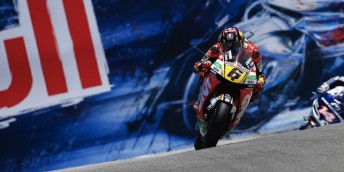 Stefan Bradl stunned the American crowd as he secured a maiden MotoGP pole position at Laguna Seca with a blistering last gasp effort in qualifying.

The German came into the event in-form but nobody expected the satellite Honda rider to top the timesheets at the daunting Californian circuit.

The 23-year-old stunned the paddock as he pipped Honda’s Marc Marquez to pole by 17 thousandths of a second.

There was another surprise as Gresini Honda’s Alvaro Bautista completed the front row in third.

Title contenders Jorge Lorenzo and Dani Pedrosa battled through pain to line up on the grid in credible sixth and seventh positions respectively.

Due to limited running in free practice, Pedrosa was forced to take part in Qualifying One but he had no trouble securing a passage through to Qualifying 2.

Yamaha’s Lorenzo set the initial pace as Qualifying 2 got under way and he held provisional pole for a few minutes only briefly losing out to Bradl.

Honda’s Marquez, making his debut at Laguna Seca, soon lit up the timing screens as he surged to the top with an impressive 1: 21.292s lap.

There was plenty of drama in the Monster Yamaha garage of Cal Crutchlow. The Brit was forced into the pits twice without setting a flying lap due to issues with his Yamaha.

These frustrations saw Crutchlow eventually leave the pits with only five minutes left on the clock to set a time.

At the halfway stage Marquez held pole from Bradl, Lorenzo and Pedrosa with Valentino Rossi lurking in fifth. However, Marquez’s session was to end prematurely following a fall with three minutes remaining however he was not injured in the incident.

Crutchlow finally banked a lap to move into third while Rossi moved into second just shy of Marquez’s benchmark. But the pair were then both eclipsed by the hard charging Bautista.

The session had more to give in the dying seconds as Bradl struck with an incredible lap which saw him grab his maiden pole position.

Rossi will start from fourth ahead of P1 fast man Crutchlow.

Randy de Puniet progressed to Q2 however he suffered a crash at turn 3 and was unable to set a time.

Western Australian Bryan Staring will line up 22nd on the grid for the US GP.