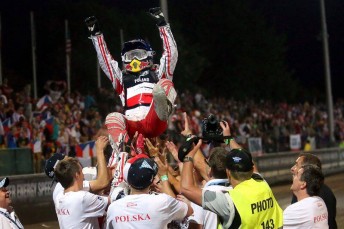 Poland relied on their tactical Joker in the sixteenth heat of the Monster Energy Speedway World Cup to take it to the final race to reclaim the Ove Fundin Trophy over defending Champions, Denmark.

The two nations entered the 20th heat locked together on 38 points, however New Zealand Grand Prix winner, Jarek Hampel was able to nail the win for the Speedway mad nation right at the finale.

Whilst Hampel rolled to the Joker win, Danish legend Nicki Pedersen was left to lament a critical engine failure during that heat 16, the gap being just a solitary point at the end of the event.

“I had lots of pressure in the last race, of course, but I handled that. It was really tough. But I had a good gate – gate three – and I did everything to make a good jump from the start,” said Hampel who is now a six times World Cup Champion.

The Poles showed little drama despite the withdrawal of former World Champion Tomasz Gollob with a back injury.

The Australians continued their good form from Thursday’s Race-Off to finish in third placing with 33 points.

Captain Kangaroo, Troy Batchelor was the Aussies’ best, rocketing in with 11 points, including a six point Joker win in a heat that included three times World Champion Pedersen. Darcy Ward scored nine, with Cameron Woodward chiming in with eight and Jason Doyle another solid five points.

“Just because we didn’t get a gold medal, it doesn’t mean we didn’t win,” said Batchelor. “We were consistent, we fought hard and we still scored points from the bad gates, which was crucial. We seemed to lose the setup in the last round of races and Denmark and Poland proved to be a little bit stronger at the end.”

The home nation, the Czech Republic scored an appalling 12 points in the affair, showing that BSI Speedway’s concept of granting the host country an automatic qualification into the World Cup Final for the first time just did not work.

That brings to a conclusion another outstanding World Cup with the main trophy heading its way back to Poland, however the main talking point at the end of the week remains around the performance of the American team and that of Latvia, who stepped up their international presence in Speedway terms in a huge way.