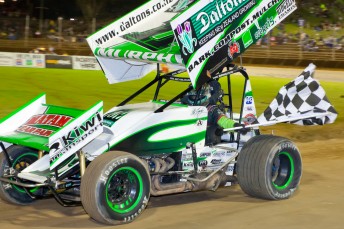 American-based Aussie Peter Murphy was airlifted to hospital after a nasty crash in a Californian Sprint Car race.

Murphy, who competed with tremendous success in New Zealand earlier this year, was flown to the John Muir Medical Centre in Walnut Creek following the accident at the Antioch track at Hanford, 45km south-east of Fresno in northern California.

He was competing in the King of the West series and is reported to be conscious and undergoing tests. Doctors have initially confirmed he is suffering from severe concussion.

Murphy, who runs a successful signage business in Clobis, California, is married with two children.

The popular Sprint Car driver, who hails from Blacktown in Sydney’s west, crewed for American Sprint Car legend Steve Kinser in the 1990’s.