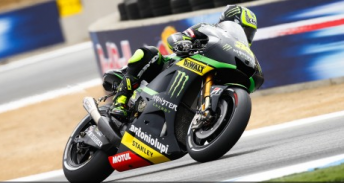 Cal Crutchlow has topped the opening practice session at the US MotoGP at Laguna Seca.

Young Marc Marquez, having his first at the northern California circuit, was third.

Jorge Lorenzo was cleared to race shortly before the session as he posted the 11th fastest time. Lorenzo remained cautious, feeling his way back after twice damaging his left shoulder in recent weeks.

Dani Pedrosa was also cleared however he did not appear in FP1.

See below for full Practice 1 results