Ricciardo fastest despite off in Red Bull

Ricciardo fastest despite off in Red Bull 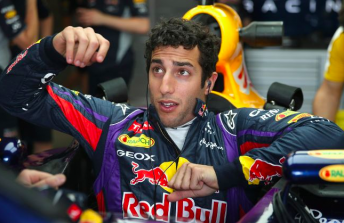 Ricciardo climbs from the Red Bull

Ricciardo set the quickest lap during the morning while in the Toro Rosso; a benchmark he could not eclipse with the RB9 in the afternoon.

His time in the Red Bull included an early drama as the West Australian speared off the track and into the gravel at Luffield, bringing out the red flag.

The incident was an unfortunate blot of Ricciardo’s copybook as he is assessed against current Lotus driver Kimi Raikkonen for the Red Bull race seat to be vacated by Mark Webber at year’s end.

Ricciardo’s best run in the Red Bull was within of his Toro Rosso best, despite the rules of the tyre-focussed testing for the regular F1 drivers prohibiting set-up changes to the car. Ricciardo visited the gravel at Luffield

“I had a small off, but otherwise it was a trouble-free day. The off was my mistake; I lost the rear,” he told media at day’s end.

“I think I drove to my ability and did what I could.

“It was a bit tricky with Pirelli and the circumstances, as we were not really allowed to adjust the car.

“Ideally you would like to make some mechanical changes and set the car up for the conditions; but it is going to be the same for all the other guys.

“It was a good opportunity to get behind the wheel and experience two different beasts.”

Carlos Sainz jr did an impressive job in his first outing in a grand prix car to finish with the second quickest time in the Toro Rosso.

Antonio Felix da Costa was seventh having completed the morning in the Red Bull before handing over to Ricciardo.

Ricciardo was one of four F1 regulars to assess the new-generation Pirellis throughout the day, with Pastor Maldonado, Nico Hulkenberg and Paul di Resta also taking to the track.