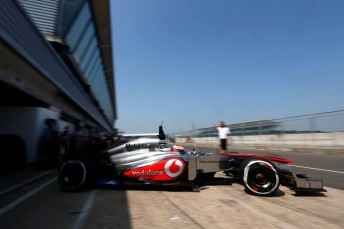 The 20-year-old Dane, whose father Jan made 25 Formula 1 starts in the 1990s, shot to the top of the order in the late afternoon on a set of Pirelli’s existing medium tyre.

Currently in his second Formula Renault 3.5 season after a two-year stint in Formula 3, Magnussen was pleased but eager not to overplay his strong start to the three-day Silverstone test.

“It’s always nice to see yourself in P1, but in a Formula 1 test we don’t know what fuel people are running, so it’s hard to compare yourself to people,” he said.

With the current drivers restricted to tyre testing, Red Bull Racing made a late decision to reshuffle its plans, bumping Mark Webber from its program.

Daniel Ricciardo, who had been set to run during the afternoon, sat idle during the day, but will now steer both the Toro Rosso and Red Bull on Thursday.

Another son-of-a-gun, Jonny Cecotto Jr, was at the wheel of the Toro Rosso on Wednesday, setting the sixth quickest time.