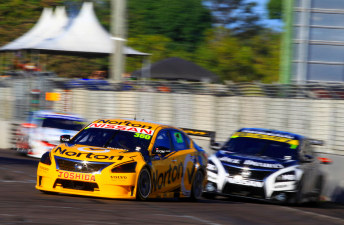 The appearance of two internationals alongside Kelly aboard a GT3-specification GT-R in the 2014 Bathurst 12 Hour is being used as an initial example of Nissan’s push to integrate its global network of drivers across its various racing activities.

Nissan is currently in the midst of a major world-wide motorsport push that includes involvement in categories such as the World Endurance Champnionship, FIA GT, Blancpain Endurance Series, SuperGT and Formula 3.

In the short-term at least, including internationals in the Altima V8 Supercar team’s 2014 endurance campaign appears as the most likely option, with a 12 Hour/1000 Bathurst double a potentially appealing prospect.

“Nissan Motorsport globally are certainly very excited about the V8 Supercar program and are quite keen to give their internationals a taste of a V8 Supercar eventually,” Rick Kelly told Speedcafe.com.

“We’ve spoken about it quite a lot and I think it’s only a matter of time before you see a couple of guys over here in a V8 Supercar, whether that be for a test or something a bit bigger.

“It (having international drivers in the Altima V8 Supercars) is certainly something that we all want to see happen.

“It’s one of the exciting things about having a manufacturer that’s globally engaged in motorsport as a part of our team. We work together closely on a daily basis.”

Cox visited Australia for the season-opening Clipsal 500 and may return for Bathurst, pending confirmation of his October schedule.