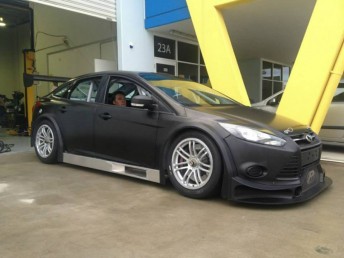 Ceprnich sitting inside the GTC prototype at Pace headquarters in Queensland

Following Pace’s work on Australia’s Car of the Future V8 Supercar and New Zealand’s V8 Supertourer, the Ford Focus-bodied vehicle is a prototype for a new class in South Africa that is being spearheaded by local racing identity Michael Formato.

The Focus is powered by a Ford Coyote V8, which delivers almost 500bhp through the same Albins transaxle gearbox as used in the V8 Supercars Championship.

Although the prototype has been built in Australia, a workshop is being set-up in South Africa that is scheduled to produce a full fleet of the cars, which will race under the GTC banner.

The engines, expected to be built by Queensland-based Craig Hasted, will be shipped from Australia complete with the gearboxes and a Motec electronics package.

Negotiations are continuing with other marques in South Africa, with the hope that a variety of body styles and engines will be seen in future.

As previously reported, initial investigations for the class had included the idea of using the entire V8 Supertourer regulations, but the need to tailor the rules to suit the downsized South African car market saw a different direction taken. 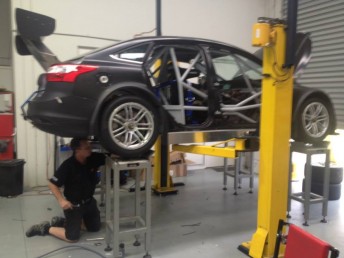 The GTC racecars will be built in South Africa

Several components utilised on the New Zealand cars will still be seen on the GTCs, including the Brembo brake package and 18-inch Hankook tyres.

“The concept is similar to the Supertourer being a common platform for different makes of cars, but the platform is a totally different way of doing things,” Pace Innovations proprietor Paul Ceprnich told Speedcafe.com.

“From a technical point of view it (the GTC car) is aimed at a very high level, but from a cost perspective it’s going to be very cheap to buy and run.”

The suspension set-up includes a pull-rod and rocker system on all four corners, which feature interchangeable wishbones and uprights in a bid to minimise costs.

Ceprnich estimates that a complete parts package for a South African-built car will come in at $130,000 AUD.

The prototype fired into life for the first time on Monday evening ahead of its maiden track run today, while a more extensive test is scheduled for next Tuesday.

“It (today) will be a very light shakedown to make sure that all of the systems work properly,” confirmed Ceprnich.

Ryan McLeod and Steve Owen are scheduled to take to the track for the shakedown, with Ashley Walsh also on next week’s driving roster.

McLeod has already ordered two of the Focus-bodied cars for use in the Creventic endurance series in which he has previously campaigned a specially modified HSV VX-R.

“We’re currently in the process of starting on Ryan’s cars,” added Ceprnich.

“His cars will be very similar in spec to the GTC cars, but we’re open to doing more with the platform than just GTC.”

A partial GTC season is scheduled to kick off midway through 2014, with a full campaign to follow the year after.