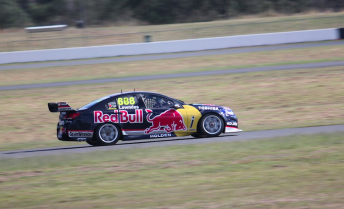 Red Bull Racing Australia’s technical director Ludo Lacroix warns that it will take several events to truly show whether his team has overcome the set-up issues that dogged its campaign in Townsville.

The squad, which has won four of the last five drivers’ titles and five of the last seven Bathurst 1000s, had one of its worst weekends in years last time out, with championship leader Jamie Whincup unable to qualifying inside the top 10 for either race.

Although believing the test should help its chances at the Coates Hire Ipswich 360 later this month, Lacroix says that the team won’t get a true reading on its improvements until it visits another kerb-laden venue.

“We’ve had a double check of a couple of things that we did in Townsville and believe that were wrong, but Townsville is Townsville,” Lacroix told Speedcafe.com of the benefit of the between-event test.

“The grip, corners and kerbing of Townsville is specific to Townsville. What we need to do from is understand what we did wrong, and go to Sandown, for example, which is closer with the kerbs, and make sure that we don’t repeat the same mistakes.

“I don’t think we’ll find all the solutions from Townsville testing at Queensland Raceway. It’s not that easy.

“Today we’ve had to focus on the bigger picture of putting parts on the car and trying to make them work for the next race.”

Lacroix believes that the characteristics of the 18-inch tyre package has had the biggest bearing on the fluctuating results this season, which has seen nine different drivers taste victory over the first 21 races.

“I think this year there is that many winners because the tyre is much more precise; with greater set-up differences required track-to-track,” he said.

“The field is so close that if you make a wrong set-up then you’re off the pace, and it’s about discovering which type of set-up works on which track.

“Clearly we were outside the ballpark of what the tyre needed in Townsville, and we must be careful to understand that the set-up of Queensland is never going to be the same as another track, necessarily.”

Erebus Motorsport and Dick Johnson Racing joined Red Bull on track for the day with their full complement of race and co-drivers.

Steven Johnson completed his first ever laps in a Mercedes V8 Supercar, although his initial hit-out was cut short after just half a lap thanks to a loose wheel.

Dunlop Series teams Matt Stone Racing and Paul Morris Motorsport added to a busy track, which was bathed in sunshine throughout the day despite early morning drizzle.