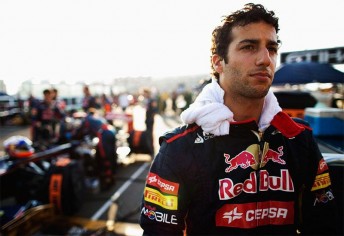 Daniel Ricciardo will drive a Red Bull at the Silverstone test

Red Bull Racing has confirmed that Daniel Ricciardo will drive one of their cars in the Silverstone young driver test on Wednesday.

The move to bring the West Australian has been made possible after the restrictions on race drivers were lifted to allow teams to try the new Pirelli rubber that will be used in next week’s Hungarian Grand Prix.

Having Ricciardo, and not Toro Rosso team-mate Jean-Eric Vergne, take part in the test is seen by many as an indicator by Red Bull that they rate the Australian highly. However, it does not necessarily guarantee him the seat which will be vacated by departing countryman Mark Webber at the end of the season.

Ricciardo will be busy as he will also appear for Toro Rosso alongside Verge on Thursday afternoon.

Red Bull has confirmed that both Mark Webber and Sebastian Vettel will run in the test, on Thursday and Friday afternoon respectively.

Also taking the wheel of the Red Bull in the Young Driver test section with Carlos Sainz Jr and Antonio Felix da Costa.