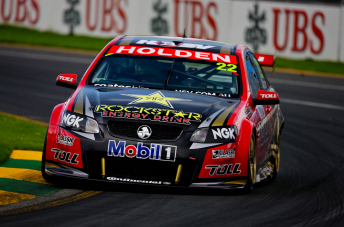 Kean has been driving an ex-Team Dynamik Holden in the Kumho V8 Touring Car Series, but will end that program in order to focus on his Dunlop Series efforts.

The Saloon Car Series graduate’s debut in the second-tier series is scheduled for Winton on August 23-25, with a full 2014 campaign the major focus.

The car will be run by South Australian squad THR Developments. The team had been preparing Kean’s Kumho Commodore and also expected to field a pair of ex-Kelly Racing Commodores in the Dunlop Series in the near future.

“Our aim was to move into the Dunlop Series in 2014 and we were working on securing a car for next year,” said Kean.

“But the more we looked at it, the more we figured it would be worthwhile to get involved in the series this year and start building my experience.

“We’ll do a handover day with Walkinshaw Racing at Winton either late this month or in August and aim to do some testing before we have our first race at Winton.

“Walkinshaw Racing have been great to deal with and will give us some support at Winton too, which is great considering it’s their home test track and their cars have done hundreds of laps there over the years.”

The chassis bought by Kean is codenamed WR 012 and was campaigned by James Courtney prior to the 2010 champion debuting a new car last year in Hamilton, New Zealand.

Its history includes a third place finish in the 2010 Supercheap Auto Bathurst 1000 with Garth Tander and Cameron McConville at the wheel.

WR 012 is the first 2012-specification Walkinshaw Holden to appear in the Dunlop Series, with the team still in possession of four unsold VE chassis.