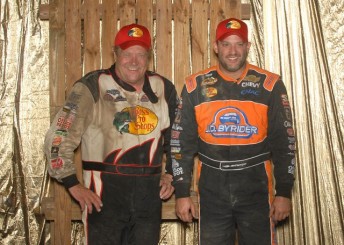 NASCAR star, Tony Stewart lambasted Sprintcar icon Steve Kinser at Eldora Speedway after a collision between the two in the $50,000 to win King’s Royal.

Stewart brandished his Tony Stewart Racing driver, Kinser, an “asshole” after the incident which saw the #14 machine torn up heavily at the circuit Stewart owns.

He claimed during the bizarre public outburst that the 20-times World of Outlaws Champion attempted on several occasions to wreck him and eventually got his wish by pushing him into the fence.

Stewart races Sprintcars and Midgets on occasions when his NASCAR Sprint Cup schedule permits, he finished 26th in this morning’s Sprint Cup race in Loudon.

There is speculation that this could be Kinser’s final full time year in the World of Outlaws Sprintcar Series, this incident may assist in fuelling the decision of the team boss and driver.

The former Indy Racing League Champion and multiple time USAC winner is no stranger to controversy or getting involved in altercations at the dirt track, being arrested in Australia after an incident at Sydney Speedway in 2011.