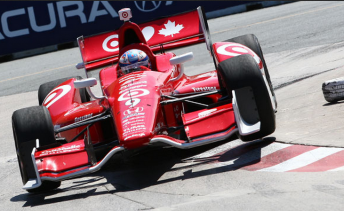 Star driver Scott Dixon has soared into contention to claim a third IndyCar title after ending the twin races at the Toronto street circuit with a pair of victories.

Aside from the $100,000 bonus for nabbing both 85-lap races, Dixon has emerged as a series title contender for the Chip Ganassi team.

The Kiwi now moves to within 29 points of Castroneves at the top of the series points after his dominant run. He has now won three consecutive races after his Pocono win last week.

“It’s quite a turnaround in a couple of weeks. I hope we can keep (momentum) going,” Dixon said.

The #9 Ganassi driver managed to spear to a commanding lead before James Jakes brought out the caution with less than 20 laps remaining.

Once the race was waved green on lap 71 Dixon quickly scooted clear to maintain his weekend domination.

Will Power had been on the move over the final quarter of the race making up several positions and moving into a podium position.

The race was interrupted again when Ed Carpenter slammed into the wall with five laps remaining bringing out a full course caution.

On the restart with two laps to go Ryan Hunter-Reay tagged Power who was under siege to hold third sport exiting turn one after his Penske machine wiggled on the exit.

The incident forced Power into the wall while Hunter-Reay suffered the same fate with Takuma Sato innocently brought into the accident.

Outside Dixon’s dominant performance one of the drives of the race came from part-timer Mike Conway who shot into seventh place after coming from mid-pack in the Dale Coyne Racing entry.

Indy Lights star did a solid job as a last minute replace for Ryan Briscoe in the #4 Panther car to finish 17th. Briscoe suffered a broken wrist in the late stages of the opening race.

See below for full results of Toronto Race 2