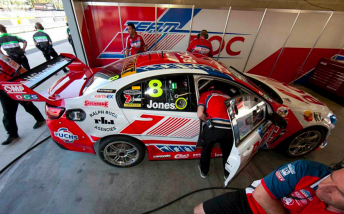 The team had planned a two-day test, and will return to the Victorian circuit tomorrow.

V8 Supercars rules allow teams to abandon a test day prior to 1100 or within two hours of their first lap if rain intervenes.

The three BJR Holdens had sat stationary in their garages during the morning without turning a lap.

“It’s frustrating because a lot of planning goes into a test and we had engine guys down from Queensland,” said Clark.

“We’re hoping that we’ll at least get one day in tomorrow because we have a lot of things that we want to try.”

BJR completed its two pre-season Accredited Manufacturer test days with its first chassis skinned in VE bodywork, and is yet to test with the VF outside of the compulsory mid-February Sydney Motorsport Park hit-out.

“We had a couple of tests planned earlier in the year but elected not to take them in favour of more workshop time,” added Clark.

Despite the lack of private running, team drivers Fabian Coulthard and Jason Bright sit seventh and eighth in the points standings respectively having won a combined eight of the year’s 25 races to date.

Ford Performance Racing is scheduled to join BJR at Winton tomorrow, although scattered showers are again being predicted.

The Ipswich venue plays host to the next event on the V8 Supercars Championship calendar, the Coates Hire Ipswich 300, on July 26-28.