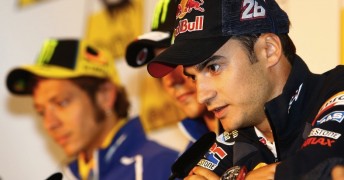 MotoGP championship leader Dani Pedrosa has withdrawn from the German GP at the Sachsenring after being declared unfit to race.

The 27-year-old Spaniard’s participation in the Grand Prix was put in doubt following a nasty high side accident in Free Practice 3, which saw the championship leader airlifted to Chemnitz hospital.

Medical examinations confirmed he suffered a hairline fracture to his collarbone and was forced to sit out Saturday’s qualifying session.

Pedrosa was declared fit to compete in Sunday warm up after passing a medical but the Honda man failed to appear in the session, claiming he was still feeling dizzy from concussion incurred in the crash.

Since the session, he underwent further checks and has subsequently been sidelined from tonight’s Grand Prix due to low blood pressure.

He will be examined upon his return to Barcelona on Monday, before discovering early in the week whether or not it will be possible to race at Laguna Seca next weekend.
With Jorge Lorenzo also sidelined after damaging his already broken collarbone in a separate free practice crash, the race seemed an ideal opportunity for Pedrosa to extend his lead in the title race.

However, with the news he is now unable to race, team-mate Marc Marquez has the chance to move to the top of the championship standings.

Meanwhile, Australia’s Bryan Staring has confirmed he will start the German GP following his nasty high side in yesterday’s qualifying session.
He said via Twitter: “Sometimes you have to suffer the bad weekends to appreciate the good ones. Thanks for everybody’s concern, I’m sore but ok.”