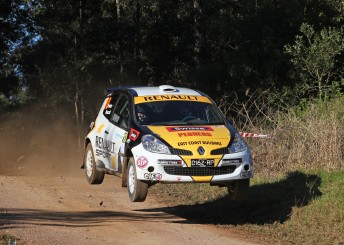 Pedder is on a comeback as just 18.7s separates he and Evans with four stages remaining

Scott Pedder has narrowed the gap to Eli Evans as the International Rally of Queensland heads to a close with the final four stages of competition this afternoon.

On a mission to close the gap on the Honda driver, Pedder peddled his Clio R3 to four out of five stage wins this morning to shrink the overall time gap to 18.7 seconds.

“We had a good run this morning despite a couple of minor issues with the car,” said Pedder.

“With the amount of [suspension] travel the Hondas and other competitors have we’re at a little bit of a disadvantage but in the tight twisty stuff the nimble little Clio R3 really comes into its own.

“The stages were very slippery as well which really worked to the strengths of the Renault.

“We’ll sort these little issues out in service now so I’m confident there’s even more speed to get out of the car and hopefully we can charge to the win by the day’s end.”

Despite yesterday’s drivetrain issues Brendan Reeves has driven his Mazda 2 into top-5 contention as he occupies the fifth spot in the ARC category.

Esapekka Lappi holds a commanding lead in the FIA Asia Pacific Rally Championship after closest rival and teammate Gaurav Gill retired from the day with a rear strut failure.

Gill was lying comfortably in second and was on course to maintain his APRC series lead but the retirement looks set for Lappi to move into the championship lead should he complete the final four stages today, unscathed.

Mitsubishi driver Atsushi Masumura moves up to second in the APRC category with Australian Adrian Coppin having a dream run on debut in the APRC as he looks set to taste champagne this afternoon, third in his Ford Fiesta R2.