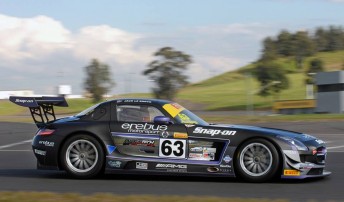 Jack Le Brocq extended his unbeaten run in the Australian GT Championship to four races by taking out the second and final 60 minute hit-out at Sydney Motorsport Park.

After winning Race 1 by 26 seconds, the reigning Australian Formula Ford champion was almost a full minute clear of second-place Klark Quinn at the end of 39 laps on Sunday.

Nathan Antunes pursued pole-sitter Le Brocq during the early laps in Rod Salmon’s Audi R8, leading the middle portion of the race once the Mercedes had pulled in.

Co-driver Salmon rejoined from the eventual changeover in second, but fell to sixth over the final six laps.

Maranello Motorsport played the opposite strategy with its Pro-Am entry, starting with car owner Peter Edwards and finishing with John Bowe.

The ploy netted a third place finish, with Bowe just 0.3s shy of Quinn at the flag.

The Aston Martin-mounted Tony Quinn and Lamborghini driver Roger Lago added to the diversity at the front of the field by finishing fourth and fifth respectively.

Having failed to take the Race 1 start following a qualifying crash from Justin McMillan, the Steven Richards co-driven M Motorsport Lamborghini came home seventh in Race 2; the first car a lap down.

The season continues with the Shannons Nationals at Queensland Raceway on August 2-4.