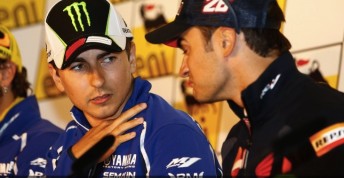 Jorge Lorenzo expected to return for Indianapolis next month

MotoGP title challenger Jorge Lorenzo is expected to make his return at Indianapolis next month following further surgery on his collarbone.

The Yamaha rider ruled himself out of this weekend’s German Grand Prix at Sachsenring when he suffered a horrible high speed crash during Free Practice on Friday.

After limping through Assen to fifth position two weeks ago with a broken collarbone, the latest accident caused further damage to his shoulder leaving him no option but to miss tonight’s race.

Lorenzo, who underwent emergency surgery on the eve of the Assen race, flew back to Spain to have yet more surgery to repair the titanium plate and eight screws which were placed to aid the healing of the injury last month.

Last night the Spaniard confirmed via Twitter he aims to be back racing at Indianapolis on August 18, subsequently ruling him out of next weekend’s race at Laguna Seca.

Lorenzo said: “To the people asking me about Laguna, I would like to say that I don’t want to take more risk and (instead) have a good recovery. See you in Indy!”

The medical team at the Hospital De Catalunya have revealed there were no complications during Lorenzo’s latest operation.

“As a result of the trauma suffered in the crash, the original fracture suffered a little movement that required new surgery to close the space and reduce the fracture by the method of osteosynthesis and with a new plate.”

“The new plate needed ten screws plus one inter fragmentary screw. We placed this implant into the collarbone to stimulate the creation of the callus and help speed up the consolidation of the bone. The operation lasted for two hours.”

With Lorenzo set to miss two Grands Prix, he is likely to face a huge challenge to keep his 2013 title hopes alive.

Meanwhile Honda’s Dani Pedrosa will decide today if he feels fit enough to take part in the German Grand Prix after being forced to sit out qualifying.

The Spaniard was airlifted to Chemnitz hospital following a yet another horrible high side accident which have plagued the Sachsenring this weekend. After medical examinations confirmed he has a hairline fracture to his collarbone, the championship leader will now decide if he feels fit enough to race.

Pedrosa, who crashed in Free practice 3, is just one of several riders who have suffered nasty accidents this weekend.