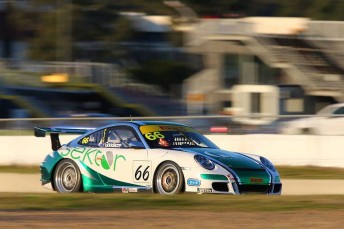 The amateur class driver proved the most consistent performer, taking two seconds and a fourth across the weekend to secure the top step of the outright podium.

Winner of the opening two races, Philip Woodbury had appeared set to take the round until a clash with debutant Jon McCorkindale while battling for fourth position in the closing stages of the final proved costly.

Requiring a visit to pit lane to fix the resulting damage, Woodbury greeted the flag down in 10th – a result still good enough to ensure second overall.

Following a failure to finish in Race 1, the Victorian charged from the back of the grid to an impressive second in the second encounter; passing eventual third place finisher McCorkindale on the final lap.

The weekend however belonged to Goodacre, who now holds an extended 83 point lead over John Morriss in the Elite Class standings.

“It’s always my goal to win outright and we did that,” said Goodacre of his weekend.

“It’s my second outright win at this track so obviously it suits me. Phillip Island is another track that we do well at so I’m looking forward to racing there later on in the year.

“I love being able to racing among the front guys, beating them and being amongst it. It’s where we want to be.”

The season continues with the Shannons Nationals on August 3-4 at Queensland Raceway.