Evans makes it ten in a row at Rally QLD

Evans makes it ten in a row at Rally QLD 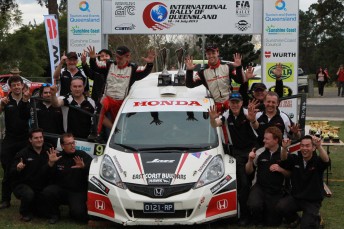 Evans’ remarkable achievement is heightened by the fact that the Honda Jazz is 10 from 10, having won every single ARC event it has contested, to date.

“That’s over 2000 competitive kilometres we’ve been the fastest car on the road so it’s a pretty special achievement for the Honda.

“The entire Honda team will definitely be celebrating tonight.”

Evans was once again locked in an intense battle for the rally lead with Renault driver Scott Pedder as things headed down to the wire with two stages remaining.

However disaster struck for Pedder on the penultimate stage of the event when he slipped off the road at a hairpin and become stuck losing over ten minutes in the process.

This handed teammate and Power Stage winner Tom Wilde second overall with Mark Pedder moving into the final step on the podium.

In the FIA Asia Pacific Rally Championship category Esapekka Lappi cruised to victory by over 10 minutes after teammate Gaurav Gill succumbed to rear strut failure earlier in the day.

The results were marred but the sad news of the death of a co-driver on Stage 14 of the event near Imbil, South West of Gympie on the Sunshine Coast.

Speedcafe’s condolences go out to the family and friends of the competitor.