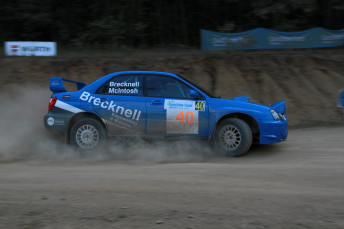 The Brecknell/McIntosh Subaru competing in the Rally of Queensland

A co-driver has been killed and a driver seriously injured in a crash on the International Rally of Queensland.

The driver, Grant Brecknell, and co-driver, James McIntosh, had been competing in the Queensland Rally Championship division of the international event.

The pair’s Brecknell Engineering and Welding Subaru rolled off the road during Stage 14 of the event near Imbil, South West of Gympie on the Sunshine Coast.

Brecknell was flown to Royal Brisbane Hospital with serious chest and spinal injuries while the crash scene was attended by police.

A joint statement from CAMS and rally organisers confirmed the death during the afternoon.

“CAMS and the International Rally of Queensland are extremely saddened by the loss of a valued member of the motor sport community. Our thoughts and sympathy go out to family and friends of both members at this difficult time,” read the statement in part.