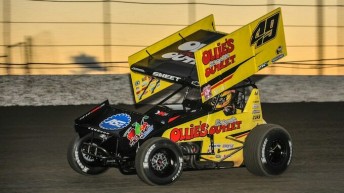 After being denied a win by Australia’s Kerry Madsen in the preliminary night to the 30th annual King’s Royal, young American Brad Sweet took the biggest win of his career at Tony Stewart’s Eldora Speedway.

Leading from the front Sweet was able to hang on and take the $50,000 prize in one of the biggest events in American Sprintcar racing.

He beat home Tim Kaeding – who has been in great form over recent weeks – and Donny Schatz.

Sydney-sider Madsen wasn’t able to repeat his Friday night success. He qualified third and then came home in seventh placing.

The other Australian in the field, James McFadden missed a transfer spot from the last chance qualifier by two positions. Bruce White didn’t establish a time in qualifying or complete a heat.

NASCAR star Tony Stewart made the field however had a coming together with World of Outlaws legend, Steve Kinser – who drives for Stewart’s race team. The clash agitated Stewart who confronted the winningest racer in Sprintcar racing history.