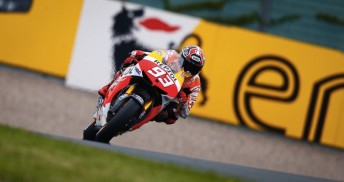 Marc Marquez capitalised on a qualifying session without MotoGP title contenders Jorge Lorenzo and Dani Pedrosa by securing his third pole position of the season at Germany’s Sachsenring.

The Honda rider set a blistering pace around the tight and twisty 3.7km circuit to claim the top spot in a session which was littered with crashes. Britain’s Cal Crutchlow was the Spaniard’s nearest challenger and will start from second on the grid just ahead of the in-form Valentino Rossi.

There was even more drama ahead of qualifying to further compound the news that Yamaha title challenger Jorge Lorenzo will miss the Grand Prix following his crash on Friday. Championship leader Pedrosa suffered another nasty high side in Free Practice 3 which damaged his shoulder and ruled him out of qualifying.

The Honda rider was taken to a nearby Chemnitz hospital where it was confirmed he was suffering from concussion and a small hairline fracture to his collarbone. His condition will be reviewed before clearance is given to start Sunday’s race. If he is fit enough to compete, he will start from 12th on the grid.

Local rider Stefan Bradl gave the home crowd plenty of optimism at the start of qualifying as he set the initial pace on his LCR Honda. But it wasn’t long before his time was eclipsed by the rapid Marquez.

Buoyed by the confidence gained from his win at Assen, Rossi was looking in ominous form and he shot to the top of the timesheets briefly before his effort was bettered by Crutchlow.

Bradl continued the run of crashes as he slid off his machine at turn three but luckily for the German he recovered to the pits and rejoined the session on his spare bike.

With fresh tyres fitted to his Honda, Marquez saved his best until the dying minutes of the session by posting a stunning 1:21.311s to grab pole. Rossi pushed hard with his final lap by moving into second but Crutchlow denied him the position by six hundredths of a second.

Bradl finished the session in fourth ahead of Aleix Espargaro and Ducati’s Nicky Hayden.

Western Australian Bryan Staring was another rider to experience a horrible high side and will start from 22nd on the grid. The Go&Fun Honda Gresini rider landed heavily on his back and was unable to complete the session.