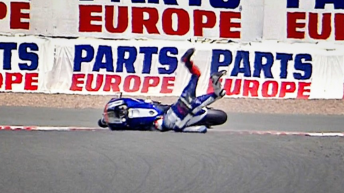 Jorge Lorenzo has damaged a titanium plate in his left shoulder after crashing in practice at the German MotoGP.

The accident comes just two weeks after he underwent surgery when had screws and the plate inserted to  his damaged shoulder after his crash at Assen.

Lorenzo has been ruled out of taking any further part at Sachsenring this weekend with the Yamaha Factory Racing rider now requiring more surgery.

He was quickest in the afternoon session before losing his bike at turn 10 which resulted in a highside loose when he landed heavily on the injured left shoulder.

The plate had been bent in the latest fall however the eight screws remained intact.

“I have decided to go home and recover after today’s crash at Sachsenring. I prefer to focus on surgery to fix the plate that was unfortunately bent during the crash,” said Lorenzo.

“I will try to recover and be back as soon as possible.”

Team Director Massimo Meregalli said there will be no repeat of the Assen heroics when he still raced on Sunday after surgery.

“He should be operated on tomorrow morning and then he will inform us, probably on Sunday morning, whether he will be back at Laguna (Seca next weekend) – because at the moment it doesn’t look like he will be,” said Meregalli.

Stefan Bradl led Honda to the top three positions in the second practice session after he turned a best lap of 1:22.030 ahead of Dani Pedrosa and Marc Marquez.