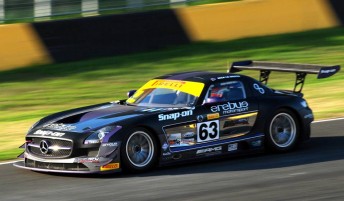 The Formula Ford graduate, who had his own 21st birthday just six days ago, greeted the flag almost half a minute ahead of points leader Klark Quinn at the end of the opening 60 minute heat.

Starting from pole position, Le Brocq led the opening 14 laps in the Erebus Mercedes-Benz SLS before diving in for his compulsory pitstop.

John Bowe (Ferrari), Klark Quinn (Porsche) and Tony Quinn (Aston Martin) all subsequently took turns at showing the way before pealing off for their respective stops.

Bowe’s co-driver Peter Edwards ran as high as second with thee laps to go but could not hold out the charging Klark Quinn and Nathan Antunes/Rod Salmon (Audi) in the closing stages.

Tony Quinn was the last lead lap finisher in fifth.

It was a tough day for the Lamborghini Gallardos, with the Justin McMillan/Seven Richards entry failing to take the start after an incident in qualifying, and the Roger Lago and Jan Jinadasa Gallardos both striking trouble in the race.

In the Formula 3 Australian Drivers’ Championship, Queenslander John Magro caused an upset by winning the opening two races of the weekend.

On both occasions he led home Team BRM team-mate Tim Macrow by three seconds having led every lap.

Nick Foster made it a BRM one-two-three in Race 1, while Jordan Oon’s most impressive appearance to date demoted Foster to fourth in Race 2 – making it a clean sweep of the top four for BRM.

R-Tek’s Nathan Morcom secured a stunning pole position in the morning, but could manage just fourth and fifth in the two races.

Magro will start the final 14 lap feature race from pole on Sunday.

The top five finishers in the seven car field were covered by a single second at the flag after an eight lap journey that ran green for its duration.

The Saturday action was completed by qualifying for Sunday’s Australian Manufacturers Championship and Radical Australia Cup plus Race 1 for Porsche’s GT3 Cup Challenge.

The drama of the day however occurred in qualifying, where a spin from Michael Almond saw the South Australian’s car collected by Fraser Ross, rendering the pair non-starters for the remainder of the weekend.

Beric Lynton and Tim Leahey proved the best of the rest in the former’s BMW 1M, albeit two seconds down on Seton’s best effort.

The stage is set for an intense battle between the John Corbett/Nathan Antunes and Chris Medland/James Winslow in the two-part Sunday morning Radical Cup race after the entries were split by just 0.036s at the end of qualifying.