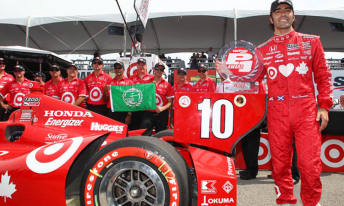 Chip Ganassi stalwart Dario Franchitti has claimed pole position for the opening race of another IndyCar twin-race weekend in the Honda Indy race in Toronto.

Franchitti managed to claim the top spot ahead of Dragon driver Sebastien Bourdais with Penske’s Will Power sealing third spot on the street course.

At a track where Franchitti scored his first IndyCar (CART) pole in 1997, Franchitti did enough to thwart the resurgent French ace’s charge.

“It feels good to get our third pole of the year,” Franchitti said.

Earlier Franchitti had made a mistake and damaged the right side of the Honda-Dallara before the crew repaired the damage ahead of the fast six.

The 85-lap opening race will feature a break from tradition with the field gridding up for a standing start.

Four-times Champ Car title winner Bourdais has a decent record at the 11-turn Toronto circuit, winning in 2004 and finishing no worse than seventh in nine starts at the venue.

“We finally got a break and the car is heading in the right direction,” Bourdais said.

“We made a lot of changes this morning in the 90-minute practice session.

Points leader Helio Castroneves will start from eighth with Ryan Hunter-Reay out of seventh.

Toronto will feature a twin race format similar to the dual in Detroit early last month.

See below for full IndyCar qualifying