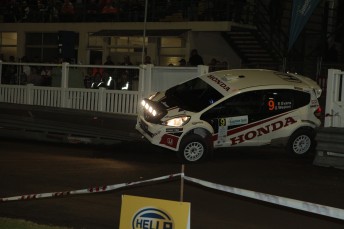 At the halfway point of Leg 1 at the International Rally of Queensland Eli Evans leads the way from Scott Pedder in the Australian Rally Championship.

Despite striking a barrier during last night’s Power Stage, which he subsequently did not qualify for, Evans fought back this morning heading to midday service with a 5.9s lead.

The morning battle saw Evans and Pedder trade blows with the Renault Sport driver taking the early stage win before Evans struck back on the following test.

“We’re going fast and trying very hard and I know Scott [Pedder] is as well. 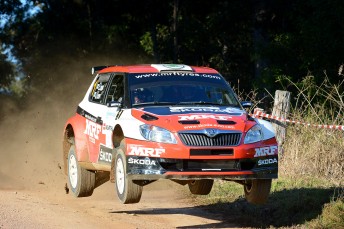 “I struggled to get rhythm in those first group of stages but our stage times we’re still pretty good so we managed to keep in front there.

“There’s nothing in at the moment between Scott [Pedder] and I, it’s an overshoot or a spin or a flat tyre and the result could go either way depending on who gets it.

Tom Wilde sits in third in the sister Renault Clio R3 with the second Honda of Mark Pedder in fourth.

Brendan Reeves began strong before disaster struck on SS4 when he broke the drivetrain on his Mazda 2.

However the team rectified the problem during morning service and the youngster fought back to set the fastest stage time on the final Pomana Dash 2, prior to midday service.

Finnish champion Esapekka Lappi has held his lead in the Asia Pacific Rally Championship section with his factory-backed MRF Team Skoda Fabia S2000 more than two minutes ahead of Indian teammate Gaurav Gill, who had a troubled morning.

The lead margin does not tell the full story, however, as Gill matched Lappi on stage wins – two each – but dropped time on the others with, first, a puncture and then two spins.

Although leading comfortably, Lappi said he was yet to gain full confidence in the conditions, which were unlike any he had experienced in the first two rounds in New Zealand and New Caledonia, or at home in Europe.

“Some parts are dry, but if you go under the trees it’s slippery,” he said.

“I’m struggling a bit in the narrow parts. I have to get a bit more confidence.”