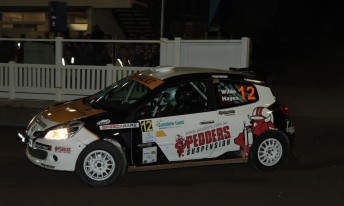 Renault Sport Rally Team driver Tom Wilde has won the opening Power Stage at this weekend’s International Rally of Queensland – Round 4 of the Australian Rally Championship.

Honda’s Mark Pedder was fourth with the flamboyant Jack Monkhouse rounding out the top-5 for Friday night’s Showdown at the Showgrounds in Nambour on the Sunshine Coast.

Current championship leader Eli Evans stunned the packed crowd at the Nambour Showgrounds when he misjudged a corner and slammed into a barrier almost rolling his Honda Jazz.

ARC crews hit the proper stages of the International Rally of Queensland from 8am  Friday morning as they tackle the six kilometre Gibber 1 test.