Rossi confident ahead of German GP

Rossi confident ahead of German GP 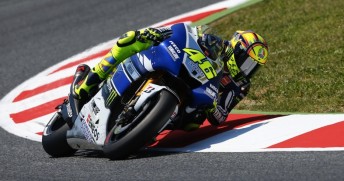 Nine-times world champion Valentino Rossi says victory at Assen has given him a much needed boost ahead of the German MotoGP this weekend.

The legendary Italian ended a frustrating winless streak, which stretched to almost three years, at the Dutch venue two weeks ago and the Yamaha rider now hopes this is the start of a run of more positive results.

The German GP held at the Sachsenring is not among Rossi’s personal favourite venues yet it has yielded four victories for “The Doctor” over the years.

Rossi told MotoGP: “I’m going to the Sachsenring with a new spirit. I am very happy for the Holland race. Now I want to keep it going like that.

“I am very happy because I have a lot of fans around the world and have had a long career with good battles and good victories, so to take the victory in Assen after a long, long time is so positive.

“Now it will be important here to confirm that I have raised my level and increased my speed to try and fight with the top guys. This track is not one of my favourites with regards to the layout, but I have had many great battles and memories.”

While Rossi’s return to the top step grabbed the headlines in Assen, arguably the story from the weekend was Jorge Lorenzo’s ride to fifth with a severely broken collarbone.

The Spaniard, who suffered a nasty crash in free practice, underwent emergency surgery just hours before the race, battling through pain to stay in the title battle.

Lorenzo will be carrying eight screws and a plate in his shoulder throughout the weekend.

Subsequently the Yamaha rider, who is just nine points adrift of championship leader Dani Pedrosa, is expecting another tough meeting.

Lorenzo told MotoGP: “Sachsenring is going to be a little tough for me after the crash at Assen. It is true that in Holland we achieved a stunning result for me, the team and also the championship, but I have to be realistic and I still have a long way to go until my collarbone is recovered.

“I made a huge effort to race at Assen and could finally manage a really difficult weekend to get an astonishing fifth.”

After finishing fourth in Assen, championship leader Pedrosa believes he needs to up his game at the Sachsenring. The Honda rider failed to capitalise on the injury to rival Lorenzo and feels he cannot waste another opportunity to extend his championship lead in Germany.

“It’s important to keep the momentum and ride my best to keep fighting for race wins. The Sachsenring has typically been a good track for me in the past and it’s a circuit where I always enjoy racing”, Pedrosa told MotoGP.