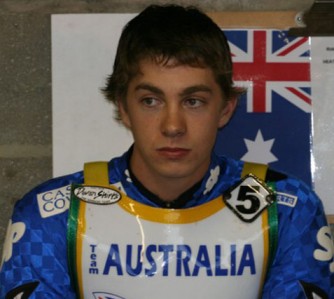 A different Australian team will line up for the opening round of the 2013 Speedway World Cup this weekend with vastly experienced Queenslander, Davey Watt coming into the squad in place of Chris Holder, who was badly injured in a British Elite League race last week.

Watt will ride alongside wonder kid Darcy Ward and highly credentialed Novocastrian, Jason Doyle – who was a shock selection for the squad by Team Manager Mark Lemon and will make his Speedway Grand Prix debut.

With Captain Holder laid up in Poole Hospital after two surgeries and debate about a third to work on his shattered heel, another Queenslander in Troy Batchelor has been handed the Captain’s responsibility.

Ironically, Batchelor and Holder have been arch rivals over recent seasons, however Batchelor, the current Australian Champion, is Australia’s next most likely to make it to the fulltime Speedway Grand Prix roster, holding one of the permanent reserve places and is in the qualification stages for next year’s competition.

Team Manager Lemon has admitted the team has taken a huge blow with Holder’s unavailability, however has vowed that the team will do it’s utmost to win for Holder.

With just the winner of each qualifying event going straight through to the World Cup final, it will be a tough ask for the Australians to dive through their opening event Sunday morning Australian time at Czestochowa in Poland. The green and gold will be pitted against a strong Polish squad headed by Tomasz Gollob.

The two power nations in Speedway competition will be racing against the Russians who have been depleted through injury and minnows Latvia. Neither Russia or Latvia have a competitor with Speedway Grand Prix experience in their squad.

On Tuesday evening (Wednesday morning Australian time), the second event will take place at King’s Lynn in the UK. The English will be hoping the recent surge of sporting success translates to their Speedway team with an injured Tai Woffinden lining up with Captain Chris Harris, emerging youngster Edward Kennett and surprise packet of season 2013, Craig Cook.

They go up against defending World Champions Denmark, who enter the competition as almost unbackable favourites. They bring with them a crack squad headlined by Nicki Pedersen and Captain Niels Kristian-Iversen, Kenneth Bjerre and Michael Jepsen Jensen.

Joining Great Britain and Denmark in the second event will be a seriously under powered Swedish team and the United States, captained by double World Champion, Greg Hancock and managed by many times Australian visitor, Billy Hamill.

The winners go straight through to the final at the Marketa Stadium in Prague on Saturday July 20 where they come up against the home team, the Czech Republic. Second and third placing in both events go to the Race-Off next Thursday (July 18) also in Prague, where the winner will be the final qualifier for the World Cup final.