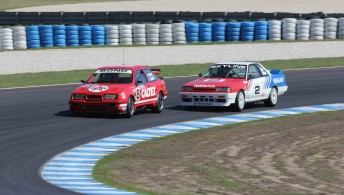 Evergreen racer Jim Richards is set to return to the wheel of  the Fred Gibson-prepared Nissan HR31 GTS-R which helped him claim the 1990 Australian Touring Car Championship.

Richards will drive the turbo-powered Group A racer at the Lakeside Classic meeting just north of Brisbane from July 19-21.

His former Nissan team-mate Mark Skaife triumphed in the car at the Phillip Island Classic earlier this year however Lakeside will signal Richards’ historic race debut in the Nissan which delivered the third of four ATCC titles to the expat Kiwi.

The HR31 made way for the all-wheel-drive GT-R R32, more widely known as Godzilla, which was ushered in for the final rounds of the 1990 championship.

“I always had a special regard for the two-wheel-drive HR31,” Richards said.

“So when the opportunity came to buy one of the team cars, I grabbed it.”

Lakeside, which last hosted a ATCC/V8 Supercars Championship round in 1998, is expected to draw a large turnout for the Classic which will feature Commodores, Toranas, BMW M3s, Ford Sierra RS500 Cosworths, Ford Escorts and other 1970s and 1980s-spec Group C and A machines.

In the Group Nc races, current V8 Supercar championship driver David Wall will race the ex-‘Pete’ Geoghegan 1967 Mustang amongst the 50 competing Group N cars, while the Bowden family will have the earlier ex-Geoghegan 1965 Mustang on display and on track for demonstration laps over the weekend.