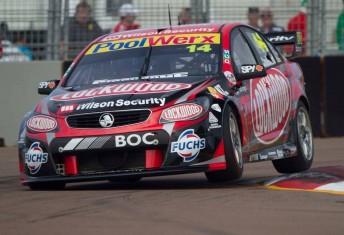 BJR’s Fabian Coulthard sits seventh in points after Townsville, one place ahead of team-mate Jason Bright

Brad Jones Racing is keeping a critical eye on the progress of the new players in the V8 Supercars Championship as it continues to operate without direct manufacturer support.

Team co-owner Kim Jones is convinced that his team does not need factory dollars to consistently run at the front of the V8 Supercars grid following a flying start to the 2013 season.

The three-car outfit has long been seen as well placed to usher in a new brand to the championship, but has been largely on the sidelines as deals between Kelly Racing and Nissan, Stone Brothers Racing and Erebus-AMG and, most recently, Garry Rogers Motorsport and Volvo Cars Australia, were struck.

Stressing that courting a manufacturer is not a priority, Jones says that rushing a new technical package onto the grid would be detrimental to the competitiveness of his team.

“When you have a look at what BJR has done over the last five years to get to the front of the field, planning to make a major change to what we’re doing is pretty low on the priority list,” Jones told Speedcafe.com.

“I think to come in and to run, especially an engine program against ones with 30 years of development in them… there’s so many elements that need to be part of that process.

“It’s not just about having the right torque and having the right horsepower, there’s all of the other issues like fuel economy and fitment of the engine in the car that people are experiencing.

“You just keep making notes about where the problems are (in case it becomes relevant in future).

“(But) even if someone walked up today with $10 million, it’d still be 2016 (before we would move to a new marque), because we’re not about to go out there and do it until it’s right.

“I think that’s the timeframe you’ve got to look at and no one has really had that opportunity yet (to introduce a new marque with a long lead time).”

Jones, who says he has only had one “informal” discussion with a manufacturer about V8 Supercars in recent times, has been absent from several events during the early phase of this season while busily shoring up other commercial deals for 2014.

With factory teams having the luxury of effectively double-selling their naming rights sponsorship, Jones says his squad must “think outside the box” when it comes to constructing its partnerships, as well as saving money in non-performance related areas.

“There’s lots of areas where we don’t spend money; we’ve still got the same B-trailer as we did when we had the Audis (in Super Touring) because a new one wouldn’t make us go any faster,” he said.

“Even the shop, we basically started there when we had an AUSCAR and a NASCAR and now we’re running five V8 Supercars (including two in the Dunlop Series).

“A lot things would be easier (with manufacturer money) but it’s just not happening. People aren’t throwing cheques at us or ringing us on the phone.

“I’m sure lots of manufacturers know where we are, especially this year. There’s just not too many people ringing saying ‘i want to be a part of your show’.”

BJR has won eight of the first 25 races run to the Car of the Future regulations thanks to the success of Fabian Coulthard and Jason Bright across the Albert Park, Symmons Plains, Pukekohe and Circuit of the Americas weekends.