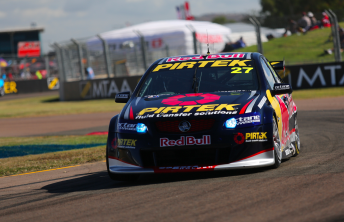 Casey Stoner’s raw speed during the opening rounds of the 2013 Dunlop Series has proven to Triple Eight principal Roland Dane that the MotoGP convert can forge a successful career if he chooses to remain in V8 Supercars.

Making his first ever starts on four-wheels in the second-tier V8 Supercars series following a highly successful period on motorcycles, Stoner has repeatedly attracted trouble during the early phase of the season.

The 27-year-old is 23rd in points after three rounds as a result; a statistic that belies the fact that he has qualified inside the top dozen on each occasion.

“Absolutely,” Dane told Speedcafe.com when asked if Stoner has already proven his potential.

“You only have to look at his lap times. They’re top six lap times and they have been almost since day one.

“(But) stringing it all together at the right time, qualifying well and managing to get a clean race without any aggravation are all a part of it and it doesn’t matter who you are, you’ve got to go through a learning curve in those areas. It’s normal.”

Stoner revealed last week that he is considering taking a sabbatical in 2014 due to the higher than expected workload he has endured during the opening events of the season.

Stoner had initially planned on dedicating 2013 to his family and other interests outside of racing before being enticed by the opportunity to team with crack squad Triple Eight and long-time sponsor Red Bull in the Dunlop Series.

Dane, who first gave Stoner a V8 Supercar test at the end of 2011, was quick to distance himself from the twice MotoGP World Champion’s decision on his future plans.

“What he does in future years is entirely up to him, it’s nothing to do with us,” said Dane.

“He’s doing this to see if he enjoys car racing and if he wants to do it all the time or not has always been a completely separate issue.

“This (racing the Dunlop Series with Triple Eight) is just a way of finding out what racing is like on four wheels.”

The next round of the season will take place at Queensland Raceway, a circuit that Stoner has driven on before in testing.

Despite the track knowledge, Stoner is playing down his chances of posting dramatically improved results.

“We know it (Queensland Raceway) but honestly there’s been no excuses with any of the tracks we’ve gone to this year,” he said.

“Within five or six laps I’ve learnt it (each circuit). Adelaide maybe took us a little bit longer than the other two (Barbagallo and Townsville), but these two have been quite simple to learn to be honest.

“We’ve tested there (Queensland Raceway) a few times but that can also be a downfall. When the track starts rubbering up with a lot of people going around it you sort of can’t get too comfortable with what you’ve got.

“We’ve got to make sure that we stay on top of what we’ve got underneath us in terms of grip and what we know it works.”

Stoner added that he’ll be simply “trying to get a clean result” during the opening Queensland heat after being hurt by the series’ unique grid formats in the last two events.

Although the Race 1 grid is set with a traditional qualifying session, the top 10 Race 1 results are reversed to set the grid for the final race. Combined points from the two heats are then used to set the starting order for the finale.

“It’s exactly what I tried to do (in Townsville) but with all the carnage at the first corner (of the Safety Car restart) ended up slitting a tyre for us and it was game over,” he said of putting in a solid Race 1.

“That ruins the whole weekend. It’s a bit strange with their set-up and points system. It works in one way and it’s a complete disaster in another. It ruins our whole weekend in Race 1.”

Dale Wood currently leads the Dunlop Series standings by 56 points over Ashley Walsh after a tough run for the latter in Townsville.