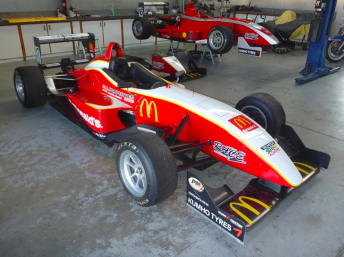 The company’s famous logo will appear on the Dallara-Mercedes of Cecil Plains, Queensland, driver Ben Gersekowski from this weekend’s fourth round of the 2013 season at Sydney Motorsport Park.

The deal has been brokered McDonald’s franchisee Mark Ward, who previously instigated the brand’s involvement in the Porsche GT3 Cup Challenge.

Team owner Errol Gilmour says he hopes that the sponsor will play a key role in plans to help young drivers progress overseas.

“We have been working together on this for almost 12 months and it’s a great moment for our team to be able to confirm McDonald’s will be on the car this weekend,” he said.

“Mark shares our teams desire to support these young drivers and give them opportunities to further their careers, and he enjoys the category and the competition.

“The fact that our team is a family-run outfit and has a clean-cut and professional reputation helped and we got on really well from the moment we started talking.

“Mark is already supporting a young guy from Toowoomba, so it made even more sense for McDonald’s to appear on Ben’s car.

“It’s taken time to get to this point, but we’re working really well together so far and the potential is there for a long term future supporting young drivers coming through Gilmour Racing.”