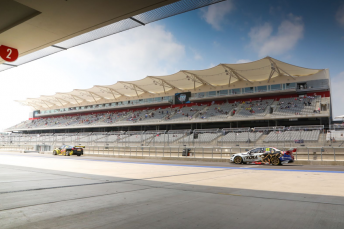 V8 Supercars will concentrate on performing in front of local audiences

V8 Supercars will temper its appetite for further international events under the leadership of recently appointed CEO James Warburton.

The championship currently includes just one event outside of Australasia, but has repeatedly spruiked its plans for holding up to six meetings offshore as part of an expansion to an 18 event calendar.

In an interview with the Australian Financial Review, Warburton said that further international races are not being pursued.

“This obsession with 18 or any other number of events, we’re making a departure from that,” he said.

V8 Supercars is currently working hard on its 2014 schedule, with key Australian meetings including the Townsville 400, Gold Coast 600 and Sydney 500 all up for renewal at the end of the current year.

“It’s a period of consolidation,” said Warburton of the calendar.

“We do have a number of events up for renewal and so far they’re progressing very well. I’m confident we’ll be in a good situation by the end of this year.

“I think for us it’s about quality of events. We have some of the biggest events in this country, the Bathurst, the Clipsals, the Gold Coast events just to name a few.

“We need to make sure that every time we have an event the quality is exceptional.”

The former Network 10 chief also expressed a strong desire to introduce evening and night races into the calendar as the championship prepares to negotiate its next television deal for 2015.

Former V8 Supercars chairman Tony Cochrane was behind a push to turn events such as the Clipsal 500 into primetime showpieces prior to the current 2013-14 television deal being struck, although those plans failed to take off due to cost.

“Everyone tells me that night racing is not possible for the economic reasons but that makes me even more determined to find a way,” promised Warburton.

“It brings other nights of the week into the equation too – it doesn’t have to be weekend racing.”

Warburton started his tenure with V8 Supercars June 1, joining the company with the permission of Network 10, with which had previously had a ‘gardening leave’ agreement following his high profile axing from the broadcaster.