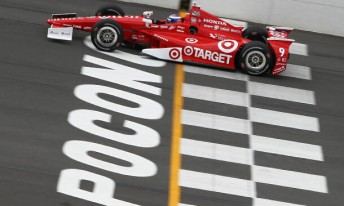 Kiwi racer Scott Dixon has brought home a surprise one-two-three for Chip Ganassi Racing and Honda at Pocono’s round of the IZOD IndyCar Series, out shining the Andretti Autosport challenge.

Dixon came home in front of Charlie Kimball and Dario Franchitti. All three had to start from rear of grid due to an unauthorised engine change. It could well have been a first four positions for the maligned Japanese engine manufacturer, however Australia’s Will Power and youngster Josef Newgarden edged past Simon Pagenaud late in the race.

“Going into this morning,  I was not thinking we could win,” said Dixon. “The team definitely hasn’t given up, and you’ve got to hand it to Honda as well.  I think fuel mileage was the key today.  And we still had speed up front without having to save all the time.

“I love this place. It’s great to be back. It’s been a long drought (since his last race win), almost a year, so it’s fantastic to be back in winner’s circle.”

Dixon survived a surge for the lead from Indianapolis 500 winner Tony Kanaan who collected the rear of the Brisbane born Kiwi racer. Kanaan had to bring his car to pitlane to fix the damaged front wing.

Starting from towards the rear, Ryan Briscoe elevated the Panther Racing machine to 14th at the end of the drawn out race.

After holding down the front row, Andretti Autosport and the Chevrolet powered cars were the favourite for victory, however that charge was soon brought undone.

GoDaddy.com’s James Hinchcliffe was the first to watch from the sidelines, crashing hard in to the wall on the opening circulation. The Canadian escaped well, but knocked his knee in the hard impact.

The next Andretti driver to go was Ryan Hunter-Reay – who was unloaded entering pitlane on the 62nd lap. AJ Foyt Racing’s Takuma Sato cannoned into the American after getting caught out entering pitlane. The Japanese put his hand up to admit fault in the incident.

Marco Andretti had a strong run at home, leading the majority of laps in the race, however fuel management became the order of the day. This saw Andretti drop to a gutting 10th at the end of the race.

Whilst Andretti were left scratching their heads at the end of the race, it was fuel management that led the Ganassi trio to victory lane, being able to extract more laps from a tank of Sunoco ethanol than their Chevrolet competitors.

Dixon’s win was the 100th for Chip Ganassi Racing in motorsport competition and the 200th for Honda in IndyCar competition.

Castroneves has extended his Championship lead over Hunter-Reay to 23 points with the next round being the Honda Indy Toronto on the streets of Canada next weekend.