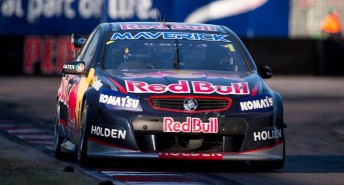 Jamie Whincup endured one of his worst weekends in recent memory

Red Bull Racing Australia will consider accelerating the development of planned upgrades to its Holdens after an uncharacteristically mediocre weekend on the streets of Townsville.

Four-time champion and current points leader Jamie Whincup struggled throughout the North Queensland event, qualifying in the bottom half of the field for both races.

Whincup went on to chalk up race results of seventh and 12th, while team-mate Craig Lowndes fared little better with a strategy gamble-assisted fourth on Saturday and a seventh on Sunday.

By contrast, Ford Performance Racing and the Holden Racing Team, both of whom shared a private test day prior to Townsville, scored resounding one-two finishes on Saturday and Sunday respectively.

RBRA principal Roland Dane says his squad is now looking forward to a test hit-out of its own following Townsville.

Tight turnarounds between events have helped ensure that testing has been even more limited than normal for most teams during the early part of the year. RBRA has not having run away from a race meeting since late March.

“It doesn’t explain all of it, but there are some things we want to try that we haven’t done yet,” Dane told Speedcafe.com of the lack of testing.

“(It’ll be) a combination of componentry, maybe even bringing forward some of the things that we’re working on, and also a matter of just understanding this car and this tyre properly.

“It (understanding the new-for-2013 package) is something that we didn’t do a very good job of earlier this year.

“We improved considerably (between New Zealand and Perth), but now we’ve allowed ourselves to go backwards on one or two of those areas by probably trying to be too smart and tripping over.”

Dane congratulated the HRT on its inspired Sunday effort in Townsville, which saw it emphatically break a losing streak that stretched back to October, 2011.

“Hats off to HRT, they not only did a better job but they gave themselves strategic options better than what we did,” he said, referring to the Melbourne-based team’s canny use of the tyre allocation.

“That was our fault because we compromised ourselves on Saturday, which hurt what we could do on Sunday.”

RBRA’s poor weekend was made all the more galling for the team by the presence of Red Bull’s global motorsport manager Thomas Ueberall.

A team spokesman told Speedcafe.com that the Austrian was in attendance to observe the recently launched V8 Supercar program.