PIRTEK POLL: Will the HRT be a consistent force?

PIRTEK POLL: Will the HRT be a consistent force? 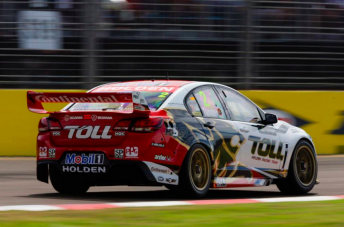 The result, achieved on the streets of Townsville, comes a year after implementing the second stage of a restructure that saw experienced Brits Steve Hallam and Tony Dowe takeover the running of the outfit.

Having blamed a lacklustre 2012 on its focus towards the Car of the Future, the HRT proved disappointing over the early stages of this season, trumped by fellow Holden teams Red Bull, Brad Jones Racing, Tekno Autosports and Garry Rogers Motorsport.

The HRT Commodores have been the subject of a heavy development program since the season opener, with a large scale front-end redesign introduced introduced for Barbagallo.

Joining the rest of the field on the Triple Eight-imported Sachs shock absorbers followed for Hidden Valley – a move that needed to be reversed after Townsville practice following a series of failures.

Made all the more surprising by the issues, the Townsville one-two was supported by the third Walkinshaw Racing entry of Russell Ingall finishing fifth in the 70-lap race, and the customer chassis of Tony D’Alberto scoring sixth.

The result was largely strategic thanks to the team’s cunning use of the slim soft tyre allocation, but came in stark contrast to the struggles of regular pace-setters Triple Eight.

Having finally returned to the top step of the podium, this week’s Pirtek Poll asks: Will the HRT be a consistent force over the remainder of the 2013 season?