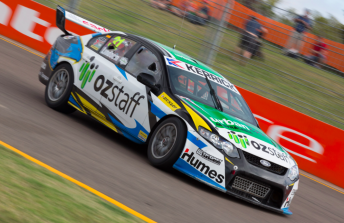 Five cars have been excluded from the third Dunlop Series race in Townsville for a parc ferme infraction.

The cars of Kristian Lindbom (sixth), Geoff Emery (ninth), Chris Pither (11th), Cameron Waters (14th) and Andre Heimgartner (23rd) were all disqualified after following the podium finishers to the pitlane rather than returning to the Dunlop Series paddock as directed.

Speedcafe.com understands that officials had specifically reminded competitors of the post-race regulations in the Townsville drivers’ meeting.

Evans Motorsport driver Lindbom is the most adversely affected by the penalty, falling from third to fifth in the points standings as a result.

The parc ferme exclusions were the only post-race penalties handed out by officials despite a rough final race that saw several cars make heavy contact with the circuit’s concrete barriers.