Owen secures Dunlop round amid chaos

Owen secures Dunlop round amid chaos 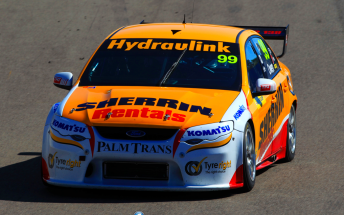 Steve Owen secured victory in the third Dunlop Series round of the year after taking out a crash-marred Race 3 in Townsville.

Owen, who had won Saturday’s opening race from pole before driving to a steady fifth in Sunday morning’s reverse top 10 grid Race 2, led all 18 laps of the final.

Team-mate Dale Wood ensured he would leave Townsville with second for the round and the series points lead by shadowing his team-mate throughout the race.

Andrew Jones completed the top three in both the race and round standings.

The first was called on the opening lap following a multi-car incident triggered when Nick McBride was turned around through the high-speed Turn 6.

The Holdens of Jim Pollicina and Nandi Kiss made heavy contact in the resulting melee, requiring a sizeable clean-up.

While positions at the front remained stagnant after the restart, the field was bunched again a short time later when Drew Russell and Rodney Jane made contact on the short chute between Turns 2 and 3, sending both cars heavily into the right-side concrete wall.

Pushed back to 13th during an opening lap scrap with Kirstian Lindbom, Ashley Walsh narrowly avoided the incident that caused the second Safety Car and managed to cut his way through to an eventual fourth.

Daniel Gaunt’s weekend ended on a sour note when he was forced to pit for repairs following a first corner incident.

The Eggleston Motorsport Holden had found itself in the middle of a three-wide squeeze involving Jones and Aaren Russell from which the latter two were lucky to escape unharmed. Gaunt was the last of the classified finishers in 24th.

See below for full Dunlop Series round results