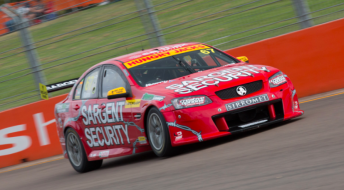 Paul Morris took a controlled victory in a surprisingly uneventful reverse top 10 grid Race 2 for the Dunlop Series in Townsville.

Following a wild opening race, Morris took the lead off the start of the second 14 lap encounter and controlled the gap back to second placed George Miedecke until the chequered flag.

Ash Walsh had been favoured to take the win after storming from the back of the Race 1 grid to secure the pole, but a poor start sent the Matt Stone Racing Ford back to 11th by Turn 1.

Walsh eventually finished seventh amidst a train of cars that had queued behind the third-placed Andrew Jones.

MW Motorsport team-mates Dale Wood and Steve Owen trailed Jones to the chequered flag in fourth and fifth respectively. The duo will start the final race, the grid for which is set by the combined Race 1 and 2 points, from the front-row with Owen on pole.

Kristian Lindbom narrowly held off Aaren Russell for sixth in Race 2, with just 0.06s separating the pair at the chequered flag.

Eggleston Motorsport team-mates Daniel Gaunt and Jack Perkins completed the top 10, with the latter having charged from 18th on the grid after being turned around in Race 1.

Another to charge was Casey Stoner, who gained 10 places from his 19th grid slot on the opening lap alone.

The going proved tougher from there however. Surviving a mid-race battle with Brett Stewart that eventually saw the West Australian’s Holden nudged off the circuit at Turn 8, Stoner finished 14th.

The third and final race of the weekend for the Dunlop Series is scheduled to commence at 1405 local time.

See below for full results for Dunlop Series Race 2